For the first time in over weeks we left the influence of the Mekong river on a 6 hour minibus ride to the backpacker paradise of Vang Vieng. It didn't take long to forget the tedium of Vientiane as we weaved our way through the mountain passes and valleys. Even the restroom breaks stopped by some stunning viewpoints.
Nestled on the banks of the Nam Ou river surrounded by black karst mountains the prolific party capital of Laos has had its fair share of controversy in recent years. Pressure from the international community following a number of fatalities brought on by a combination of booze, drugs and limit health and safety regulations caused the local government to reduce the plethora of bars along the tubing route. Nowadays there are "supposedly" only four bars remaining, although others are sneaking back (we counted seven).
Despite the clamp down the town still attracts many tourists who are drawn by the landscape, lagoons, tubing and rock climbing (to name a few).

Jono, Will and I befriended an English couple Ed and Laura (Dora) who are backpacking around South East Asia following a year teaching English in China. After checking a few options we finally chose "Easy Go Backpackers" as our new home. The basic three bed room Jono, Will and I vacated was exactly what it said on the tin but it was extremely cheap and with breakfast included what more could you ask. The local girls who ran the place were very helpful and always had a smile on their faces. You don't get that at a Premier Inn.
Contrary to our usual lifestyle we chilled out on the Friday with the intention of being well rested and pumped up for a day tubing.
The following morning we strolled the short walk to the centre of Vang. Vieng where you grab an inner tube and catch the Tuk Tuk to the starting point a few kilometres up river.
The first three bars (four really) are really close to the start point and no sooner have you got your backside wet in the brisk water, your back out again enjoying a cool Beer Laos and a free Lao Lao whiskey shot. The atmosphere is relaxed and there is no pressure to drink yourself senseless. However if you start early it's a long session  and the presence of whiskey shots makes getting pissed a definite possibility.
If the first three bars isn't enough there are a couple of what we called "Ghost Bars" to help satisfy your thirst. There not strictly on the bar crawl route but you don't begrudge them sneaking back in to make the most out of a steady steam of tourists looking for a drink. 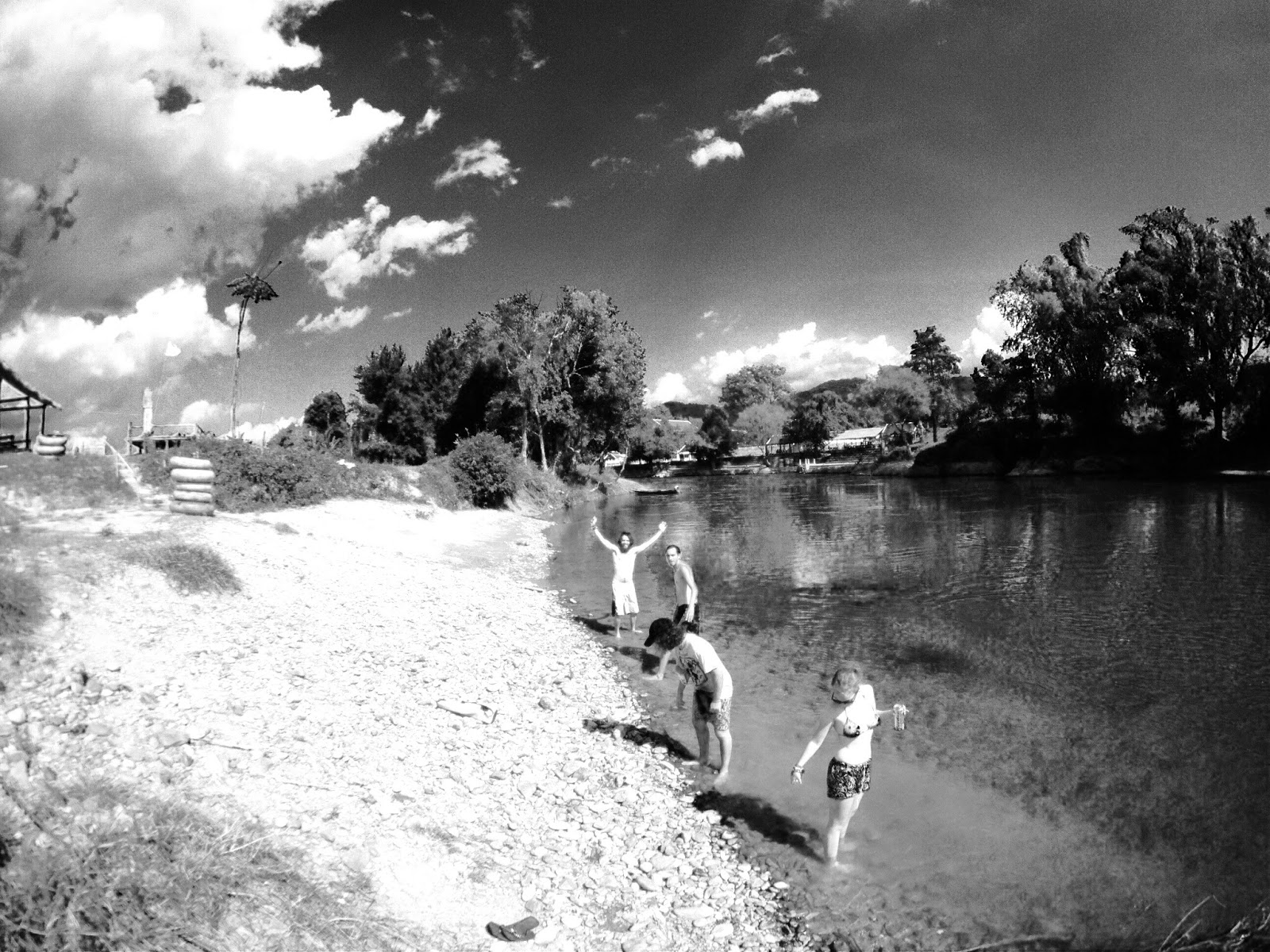 After the fourth (more like the seventh) there is a 45 minute tube back to Vang Vieng (depending on how intoxicated you are, how many times you fall out, your weight, whether you get snagged on a branch, whether your tube deflates and the strength of the current). If you want to avoid tubing in the dark we were advised to leave the last bar no later than 4:30pm. If your forced to exit the river early you will get rinsed by the Tuk Tuk drivers that stalk you along the riverbank.

The party doesn't have to stop in town as in the evening many bars offer free Lao Lao whiskey shots at various stages of the evening. This is enough to finish off even the most alcohol resistant punters. In our case we were pretty merry by 9:30pm, dancing around by 10:00 and who knows what happened after 11:00. It was a great day for all involved.

After experiencing Vang Vieng first hand I'm adamant the days of multiple fatalities has been left in the past. The zip lining into shallow water has gone and the bar crawl along the tubing route is as chilled and steady and the river you float down. Obviously you can make it as messy as you want but really your better off drinking what you can, getting back to town a little bit dazed and damp but in one piece  and making a complete tit of yourself in the bars later on. I say this as we were in such a state the following day we couldn't even attempt a second run on the crawl. Maybe that's due to the alcohol consumption or maybe age catching up with me.