This is the story "Boney Bruvs and the Three Gili's" : Part 1 the Big Gili thats too hot

It took the fast boat around an hour and a half to reach the largest of the Gili Islands, Gili T (after stopping by mainland Lombok, Gili Air and Meno). Even during the low season it’s clear from the outset that the islands are the most popular tourist destination in the region and our boat was packed to the point where some people had to stand for the duration. The ferrymen seem to put safety to the back of their minds in favour of a little extra Wonga. After chatting to a few passengers the range of ticket prices was astounding. A German couple sat behind me claimed they paid 500,000 IRP (£25), a middle aged Frenchman next to me settled for 600,000 IRP (£30) but the worst deal had been made by a young Dutch guy who had been utterly rinsed at 1,100,000 IRP (£55). A lot of the tourist on board were clearly not backpackers looking for a good deal and were quite happy to take the first price offered at face value. This is fine if you have more money than sense but as with most countries in Asia, Indonesian’s expect to haggle. Jono and I bought our fast boat tickets direct from the ferry terminal for 200,000 IRP (£10) and if you want to achieve such a saving following these tips.


1.      Do not buy a fast boat/shuttle bus combo ticket: These tickets seems like a good idea as it seems relatively stress free and for the lazy tourist it’s a popular option. The downside is that you are likely to spend twice as much (or worse) as the bus companies take a large commission. If you like being crammed into a minibus and herded onto the boat like cattle take this option but it’s just as easy getting a bluebird cab (on the meter) if you’re a group of three or four people.


2.      Don’t believe everything the tourist information desks say: Many travel desk operators will try and spin a lie that the last fast boat leaves at around midday. This is a ploy to make you choose the shuttle bus in a mad panic. After spending a few days in Padang Bai I can safely confirm that boats leave almost every hour during daylight hours.


3.      Spend some time in Padang Bai haggling for the best price: Padang Bai used to be a bustling backpacker pit stop until the bus companies started selling boat tickets. Nowadays so many tourists travel through the town quickly thus causing incomes to fall in town. It’s sad for the locals but it does mean you can haggle and achieve great discounts.


4.      Avoid the open return ticket: I fail to understand why people take this option. Most of the ticket providers will pressure you into buying an “open return” and will claim it’s the best way to reach the islands as you can return whenever you want for no added cost. What they fail to tell you is that an open ticket costs three times as much (cheapest we saw was 600,000 IRP) and if you can get a one way ticket for 200,000 IRP in Padang Bai you can do the same on the Gili’s.


Even with half a glimpse from a portside window it’s clear to see what makes these islands so popular. Each member of this archipelago breaks through the turquoise surf like pimples of tropical flora, flanked by soft white sand beaches and enveloped by bordering reef. Where the islands differ is in their size and persona. ﻿﻿
In the case of Gili T it’s larger and louder than its smaller siblings. The main strip close to the pier is populated by a plethora of bars and clubs specializing in almost solely reggae during the day and moving onto house and trance in the evening. The presence of “Tir Na Nog” Irish bar confirms that this island is dilute of any Indonesian culture unless you count the sporadic spacing of the locally owned warung cafés serving great Indo cuisine.
We checked into “Andy Homestay” which sat quite nicely at the extreme budget end of the accommodation spectrum (80,000 IRP for a double room). The fairly standard dingy, mosquito ridden room with little natural light and a fan with the strength of a butterfly flapping it wings wasn’t great for a good night sleep but on Gili T that’s the least of your concerns. Your main thought is exploring land and sea by whichever means you can afford. For Jono and I this meant grabbing a bike. There are so many touts offering bikes, snorkels and fins it never takes long to find a good deal. We paid 40,000 IRP (£2) to hire a bicycle for the day and luckily for us Gili T is large enough to have a decent track around its coastal perimeter. Using bikes is definitely the best way to get around Gili T and a full tour of the island will take around an hour even at a casual pace. We were a little bit dumb and forgot to hire a snorkel during our time on the island (although we did get our act together on Gili Meno & Air) and as we discovered later in our Gili tour there is nothing better than finding a quiet stretch of beach and swimming out over the reef. On this occasion we had to settle with swimming and sun bathing (it’s a hard life).


The ride around the island was extremely pleasant and allowed for great views of the volcanic peaks on Bali. The disappointing thing for me though was seeing the impact of tourism on the natural environment (especially on the North and South of the island). Out of all the islands Gili T is the most developed and the entire seafront is dominated by relatively new luxury bungalow resorts. This would be fine if the island had the natural resources to match but it doesn’t. Drinking water has to be imported as the islands water supply dwindles due to the presence of hundreds of swimming pools and power cuts are a regular occurrence due to an elevated demand for electricity to run A/C systems. Judging by the amount of construction work it will not be long until all available space is consumed by unnecessary accommodation.

Despite this there are still isolated spots of beach free from hassle from restaurants and resorts. The beach on the South East side of the island is a popular spot for surfing and it’s easy enough to rent a board. The waves are breaking on the edge of the reef so you have to take some care but if your surf skills are limited like mine then you can always grab a lesson or some decent advice before heading out. The south coast is a great place to end the day as it offers the best views at sunset looking out across the Lombok Sea towards Bali with the occasional sighting of turtles coming to the surface to breath. 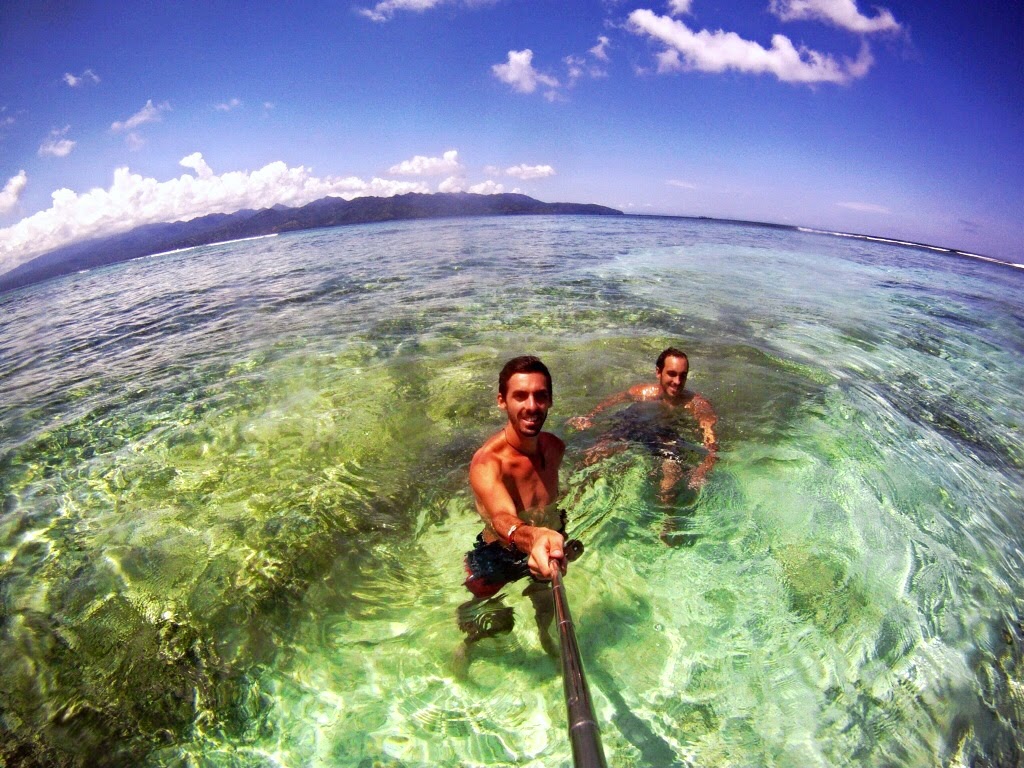 When it comes to food Gili T offers every Indonesian and western dish available but our favourite bargain option can be found at the food market once evening descends and the fishing boats return with the days catch. Prices vary on the size of the cut but a typical sized helping can be bought for 40,000 IRP and the seafood was the freshest you could ever wish for. I tried some grilled Mahi-Mahi (as I wanted something you can’t find in the UK) and it was top notch.


We both had a great time on Gili T but the island does sit on the overly touristic side of the spectrum, almost to the extent where if it wasn't for the reefs you wouldn't know you were in Indonesia. You could be on a Greek Island. This is fine in small doses but its not long before we both felt like moving on to try something different. Hence the slightly obscure Goldilocks reference.
Composed by Unknown at 12:01