George Town the capital of Penang Island was our first destination in Malaysia. As the name suggests this bustling town was first founded in 1786 by a British naval captain called Francis Light and named after the then British monarch King George III (What better way to get prestige and quite possibly wealth and a title). Captain Light captured the region as he required a suitable base for the activities of the British East India Company as they attempted and ultimately succeeded in increasing Britannia's dominance over this profitable part of the world. Under the watchful eye of the British Empire the founders managed to turn a sleepy fishing village into a major commercial hub. Today the old town contains many of its original colonial buildings and structures. Most notable is the stronghold of  Fort Cornwallis which despite being a shell of its former self still highlights how highly prized the island was to the worlds largest superpower at the time.


The British weren't the only western powers to occupy the island with the Dutch, Portuguese and French claiming the territory beforehand although there is architectural evidence today.

Jono and I stayed in a very nice hostel in the heart of the old town called "House of Journey". The young couple working there were incredibly helpful and interesting. They had both spent a number of years living in Manchester, England for studies and travelled Europe before returning home to run this great establishment. Check out the links for more details.


Georgetown remains a prized possession for the Malay people and the International community. In 2008 the old town was officially granted UNESCO status which should ensure the historic hub remains preserved for many years to come. Since the change in status the town has become the gem of the Malaysian tourist trail. There are many sights to keep anyone preoccupied for a few days. The city is famous for its great array of street art both in the commonly used media of spray paint but also metal rods. Its a great way to get your bearings around the old town's narrow streets and also completely free. 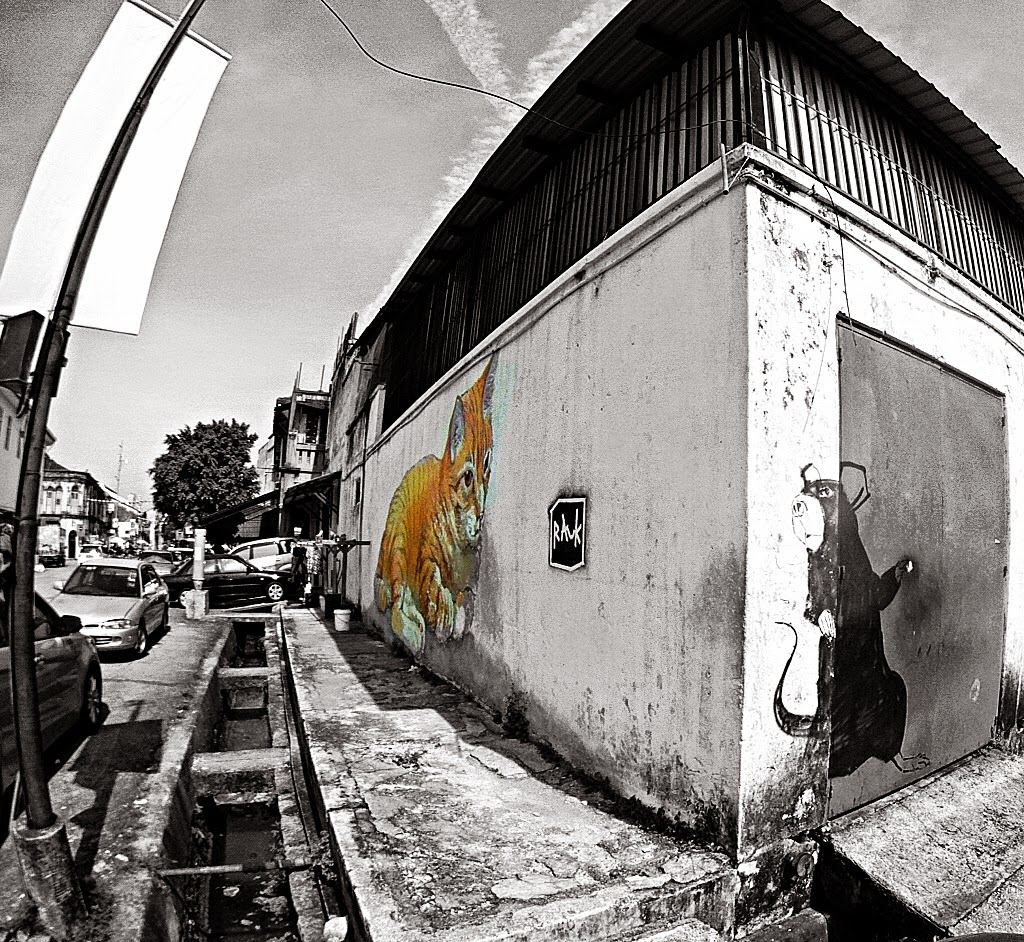 Another great feature of Georgetown is its well preserved wharfs that have stood since the settlements birth. The same families still own and in some cases live on the same wooden structures that supported their ancestors.

Penang's capital is a great melting pot (or in this case cooking pot) for a range of great cuisine. The street food is famous all around Malaysia. Its inexpensive and there is great selection. George Towns population is made up of Malays, Chinese and Indians and over the years the town has developed its own versions of the best dishes these cultures have to offer and have even adapted dishes from neighboring countries. One good location is a food court called "Red Garden". It's a great place to eat with a group as every possible food option is available from Thai to Sushi or Korean to Western and at 9pm they normally have live entertainment to accompany the experience. It's a bit like an outdoor Working Men's Club with lady boys instead of bingo.


The sights continue outside George Town with the funicular railway up to Penang Hill or Penang National Park on the islands North East shore offering great views and the chance to see wildlife. We visited the National Park on two separate occasions for a bit of trekking. The first visit involved an easy one hour walk through the forest to Monkey Beach. Not the most stunning strip of sand in the world due to the litter but it did offer a nice place to swim and sunbathe after a sweaty hike.

﻿
The second visit required a slightly longer but by no means difficult trek to the more isolated and stunning Turtle Beach. We were unable to swim when we visited as a red flag was raised due to toxic jellyfish but we were still able to see the small but impressive green turtle sanctuary. The workers collect some of the youngsters when they hatch and ensure their well fed in small tanks before releasing into the wild. This was our first sighting of a baby turtle and no doubt its more spectacular seeing them in the ocean but there's no denying the world would be a worse place if these critically endangered creatures die out.
Penang National Park is also a great place to grab cheap accommodation if your willing to rough it as they have a number of free camping grounds. We may have considered it if it hadn't been raining heavily every evening but what can I say we wimped out.
﻿﻿﻿﻿﻿﻿
﻿﻿
﻿